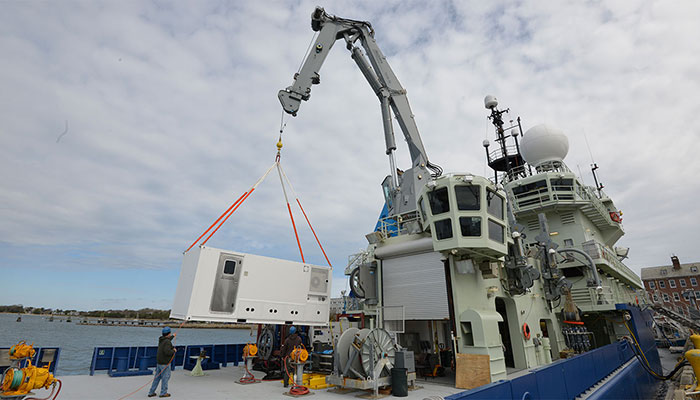 The ROV van, where we will be spending many hours on the cruise, is loaded onto Neil Armstrong. (Photo by Ken Kostel, Woods Hole Oceanographic Institution) 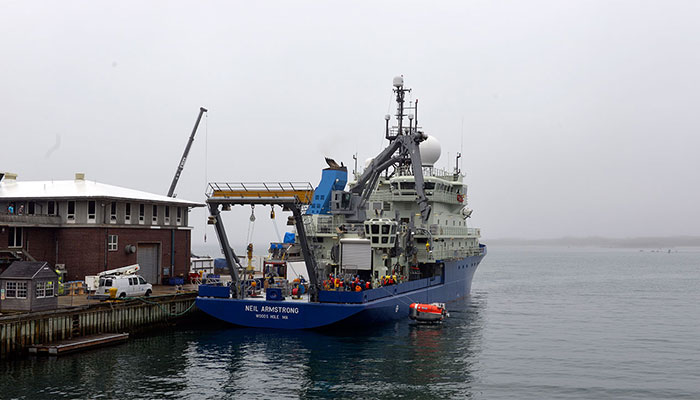 NUI goes through a test deployment at the WHOI dock prior to science verification cruise #4. (Photo by Ken Kostel, Woods Hole Oceanographic Institution) 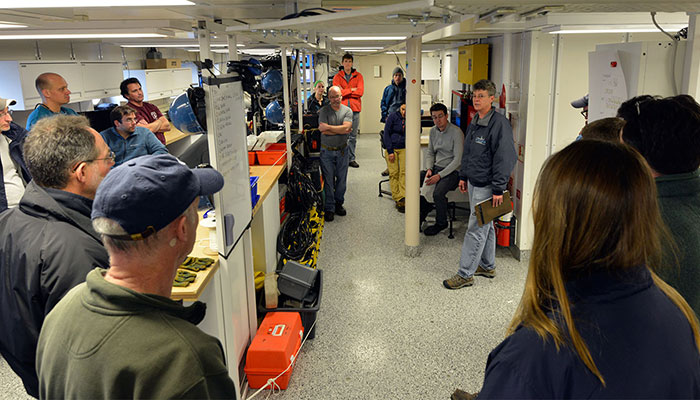 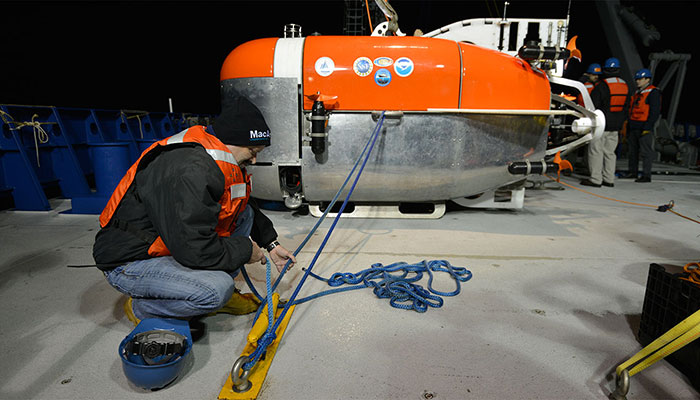 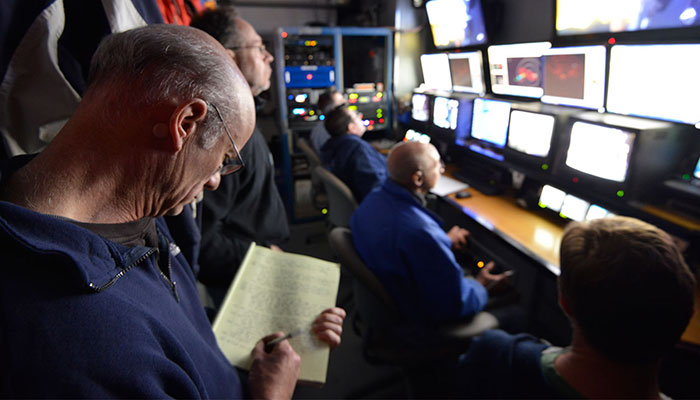 Science Verification Cruise #4 began yesterday at about 8:00 a.m. when the Neil Armstrong left the WHOI dock—and immediately returned. That was intentional, as we wanted to test deployment procedures for the two vehicles on board: WHOI-built Nereid Under Ice (NUI), which will operate in autonomous mode, and the Univ. of Connecticut’s remotely operated Kraken 2. To do so, we needed to turn the ship and tie up with the port side to the dock so that the main crane could put the vehicles into the water on the starboard side.

Once that was completed at 1:00, we pulled our lines and sailed off into the fog and drizzle. Nine hours later, we arrived on station—too late to begin work with the ROV, so we opted for some launch and recovery tests with NUI from a moving deck. By midnight, and with a list of improvements to make before their next opportunity to go in the water tomorrow evening, the ship’s crew and NUI team decided to call it a night.

This morning began like many mornings at sea: with a meeting. Today will address the first primary objective of the cruise—to use the ROV to recover an autonomous underwater vehicle docking station at one of the mooring sites of the Pioneer Array, which is one of several coastal, regional and global components of the NSF-funded Ocean Observatories Initiative. The array is a collection of 10 moorings spread across seven sites about 100 miles south of Martha’s Vineyard collecting a wide range of meteorological and oceanographic data and transmitting these to shore. One mooring also includes a seafloor docking station for a REMUS 600 autonomous underwater vehicle that, once installed, will allow scientists on shore to fly pre-programmed, standardized missions as well as “missions of opportunity” to investigate unexpected events. When the AUV returns to the dock, a wind turbine on a buoy at the surface will supply power to recharge it; it can also send its data back to shore via a satellite antenna on the same buoy.

Because it is part of a complex configuration, recovering the dock is not straightforward. First, the ROV has to disconnect a power and data line between the dock and the anchor at the base of the mooring. Then, the ROV has to maneuver 300 meters or so over to the dock and connect a line from the ship so that we can haul the dock to the surface. It may sound simple, but launching the ROV and maneuvering it into place to disconnect the cable took up the first half of the day. Then the ROV and the ship engaged in a delicate dance of first one and then the other moving in short hops to the location where they hoped to – and ultimately did – find the docking station.

There is also another dance taking place between operators of the ship and ROV: both are learning how the other team works and how their systems can integrate with each other. This is important because the Kraken 2 ROV team may have to conduct similar missions in the future. That makes the human systems just as much a part of this verification cruise as the vehicles.