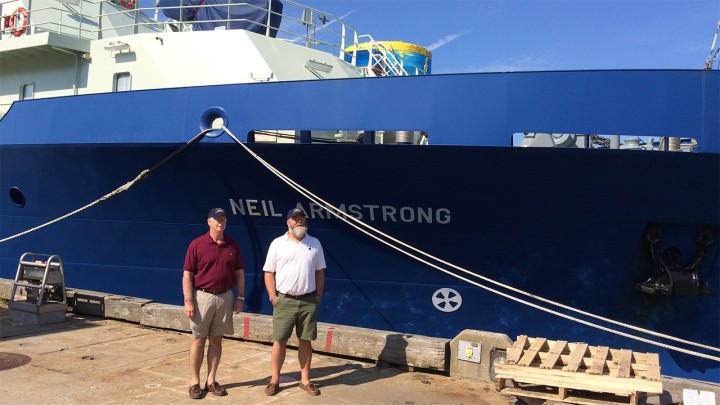 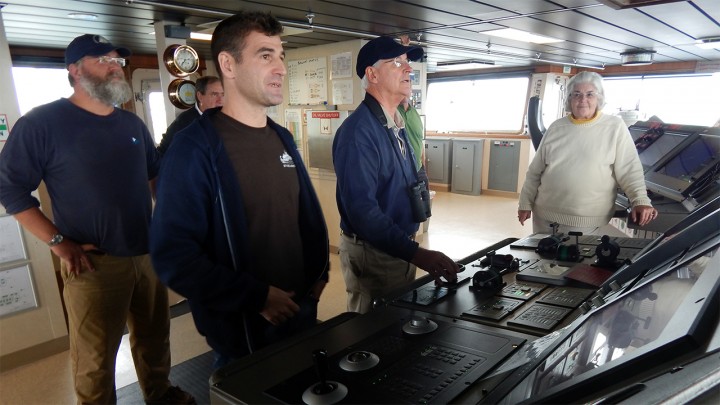 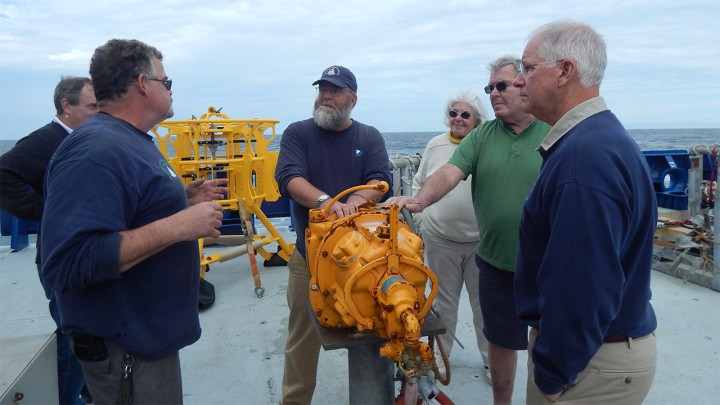 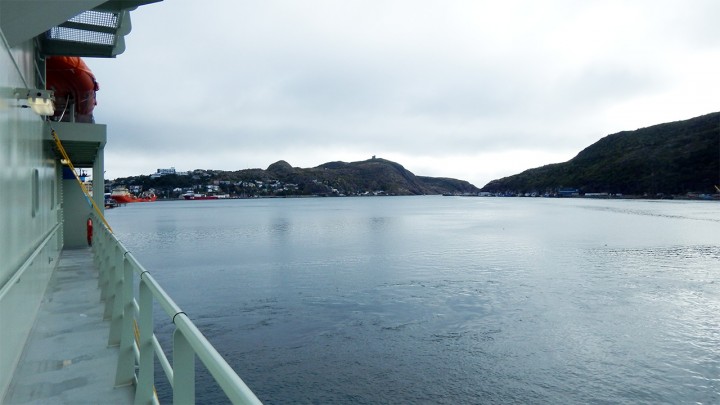 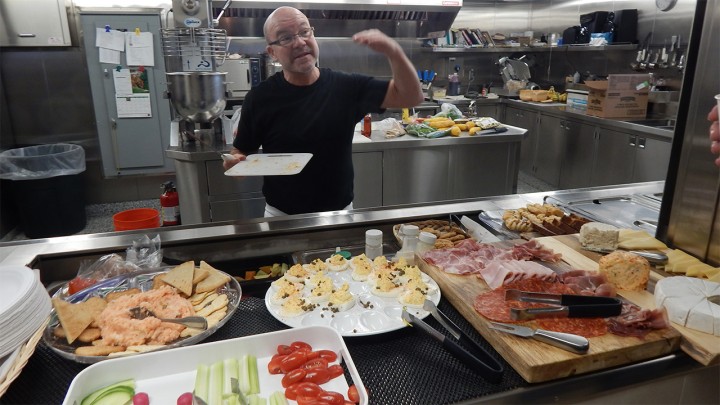 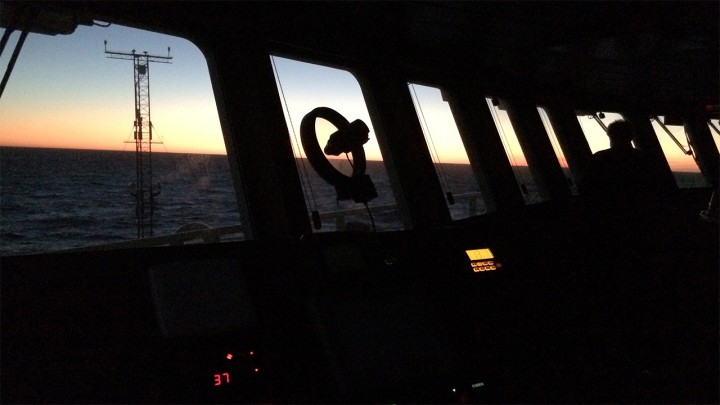 As a board member of the Grayce B. Kerr Fund I’ve been peripherally involved with WHOI for years now, watching various research projects come to life and helping scientists advance their important work. A little while back, some colleagues and I were offered an incredible opportunity to travel aboard the R/V Neil Armstrong on a four-night transit from St. John’s, Newfoundland, to Woods Hole, Mass. The ship had just finished up its first international research trips off the coast of Greenland and was heading home.

When the offer to join the crew came from the WHOI Development Office, GBKF president John Valliant and I jumped at the opportunity! Our wives, however, didn’t quite share in our enthusiasm. So John and I packed our bags and headed to St. John’s. This colorful little seaside town with is well worth a return visit.

John and I were a part of a team of 6 observers. This trip didn’t include any science or buoy deployments, but we did get to experience life aboard a research vessel alongside a crew of 20. The opportunity to go on a cruise turned out to be a unique glimpse into an area of ocean science that never gets the spotlight–the behind-the-scenes work done by the crew of a research vessel.

We set off around 9:00 a.m. and from the observation deck we were treated to the stunning topography of the coastline and a few rainbows. It wasn’t long until we pulled out into more open water and had a chance to test our sea legs.

It wasn’t particularly rough weather, but we did have some leftover churn from tropical storm Hermine far to the south. As our Captain put it, the Armstrong is a “lively” boat. “She floats like a cork,” he said with a smile. Of course, we were regaled with stories of actual rough weather. My hat’s off to these professional mariners. I couldn’t do what they do, that’s for sure, and I’m certainly too old to start now.

We were warned that it’s common for visitors to become seasick the first day out. I’ll only speak for myself, but I’m happy I called in a prescription for Meclizine. I slept for 15 hours that first evening! Many crew members assured me I wasn’t alone, and that it’s common to see a newcomer “disappear for a couple of days” once underway!

After getting accustomed to my new “lively” home on the sea  I was able to get a look at the ship. The crew quarters are very comfortable–picture a (very) small college dorm room. I had a cabin to myself, and it was a nice refuge. Had I shared this room with a bunkmate for a 40 day research trip, it would have been a much different experience.

We were fortunate to spend a lot of time up on the bridge. What a view up there! We had lots of time for whale watching. Out beyond the sight of land there are many whales–they’re like squirrels in the park. We also spotted a jumping marlin, a dead whale being consumed by blue sharks, some large ocean sunfish and one of those “goddamn mylar balloons” that I’d recently read are unfortunately so common out there.

Each day, we were treated to a different comprehensive tour that introduced us to the inner workings of the ship. There were a couple of standout presentations. Chief Engineer Steve showed us almost every moving part below decks, including the engine room with it’s massive Cummings diesels. “Moorings with Kyle” was a comprehensive look at how scientific data collection tools are deployed off the back deck of the ship. It was so enlightening to see how data is actually collected for the research projects we’ve been hearing about for so long. This is not easy work to begin with–add some rough seas and it’s a challenge to say the least.

Oh, and I probably shouldn’t give away this secret, but the food was amazing! That’s the last thing I would have guessed going into this trip. I could go on, but suffice it to say, the crew is well fed. They joked that it’s just because there were guests aboard, but I don’t believe it. [Editor’s note: Don’t believe it, the food is always good.]

I’d like to extend a giant THANK YOU to The captain, mates and entire crew who were entirely gracious, helpful and patient as a small team of outsiders casually ambled about the ship and invaded their space for a few days. At 238 feet, the ship might sound like it’s pretty big, but 26 people are guaranteed to bump into each other often!

I was so impressed with the crew’s camaraderie and the family atmosphere aboard. Getting to know some of these grizzled pro’s who’ve been working at sea their entire adult lives (and for many years together on this ship and the Knorr before it) you get to understand how much they respect one another and feel fortunate to be supporting oceanographic research. There were no complaints, but it’s obvious that the crew (and scientists) sacrifice a lot to be out there. I walked away with a great appreciation for what it takes to keep this ship running smoothly.

Eventually, we were in sight of land. I got up early to see the sun come up on that last day and it was spectacular. Soon we were treated to the familiar sights of Martha’s Vineyard and Falmouth on the south coast of Cape Cod. As we pulled into Woods Hole we were greeted by a few dozen friends and family and it was easy to imagine how happy the crew must have been to get a little time off after a long successful international trip.

There’s more to say about this experience but I’d sum up by saying it provided many great memories and quite an education. I will from now look forward to seeing the R/V Neil Armstrong tied up at Woods Hole during our summer visits, and keeping tabs on the ship’s and crew’s adventures for many years to come!