New Year with a New Ship 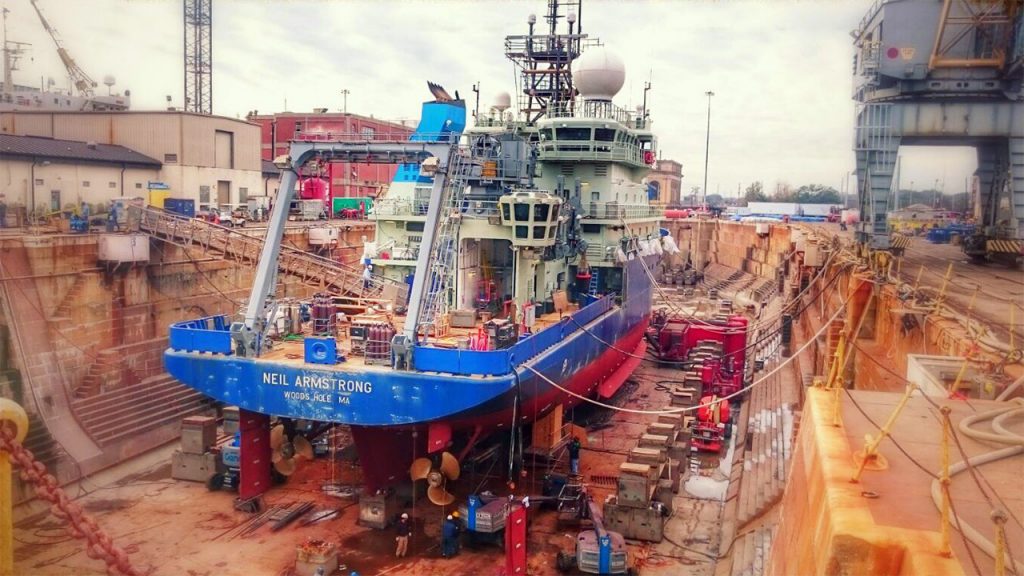 R/V Neil Armstrong getting ready to receive a fresh coat of paint in Detyen’s Shipyard.

Lots of folks start a new year hoping to lose some weight. R/V Neil Armstrong, however, rang in 2017 waiting to take on a few pounds—almost 700,000, in fact.

Since November, the ship has been in Charleston, S.C., as part of its final construction yard period. During this time, which lasts until early February members of WHOI Ship Operations and the Neil Armstrong crew plan to check off the last outstanding issues where the ship’s design didn’t quite match with the way it needed to operate. “Any time there’s a first-of-class ship, you’re going to find things like this,” said Gary McGrath, the ship’s chief engineer. “Out of all the 160 items we had originally, we’re down to a dozen or so. We don’t have many left, to be honest.”

One of those had to do with the way the ship rides. When it sailed from Anacortes, Wash., in 2015, Neil Armstrong turned out to be much lighter than expected, so it sat higher in the water than the designers envisioned. For that reason, WHOI has been running it as heavy as possible as often as possible, with ballast and fuel tanks full. But that isn’t a long-term solution because long trips burn fuel, making the ship lighter over time.

High-density magnetite slurry being loaded onto Neil Armstrong in January 2017.

As a result, the WHOI team is working with Glosten, Inc., naval architects and representatives of Detyen’s Shipyard, where work is currently being done, to add 309 long tons (nearly 350 U.S. tons) of magnetite-laden, high-density concrete to key locations inside the ship. This should push the ship lower in the water and improve its ride in rough seas.

Other big changes include construction of an enclosed instrument handling station on the starboard side just aft of the changing area known as the “Mud Room,” and the addition of attachment points for removable rails to shuttle instruments from it to the starboard cranes. This will be especially good news to scientists, students, and technicians who spend much of their time at sea collecting samples from the CTD rosette and prepping instruments to go over the side 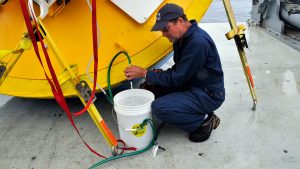 More tie-down locations like those shown here getting heavy use securing a buoy to the deck during an OOI cruise.

Science teams will also have more deck tie-downs for heavy equipment and the added flexibility of installing lab or storage vans on the forward 01 deck currently occupied by a mobile deck crane. The latter upgrade requires additional tie-downs to secure vans to the deck, with structural steel to be installed underneath the deck. In addition, the ship is receiving the last of the standard scientific sensors listed in the construction specifications—a WaMoS wave radar that will provide data on wave height and surface currents—and an upgrade to its underwater communications and navigation system.

Improving livability is also on the agenda. Parts of the galley will receive a makeover to improve food service during meals and the laundry room should be able to stay open in rough weather now. Even crew who venture out in the work boat will see a noticeable improvement in the experience, with the repositioning of the water discharge on the port side of the ship so that their trips don’t begin and end with an unwanted bath.

“These are things that will help fine-tune an already fine boat,” said Al Suchy, director of WHOI Ship Operations. 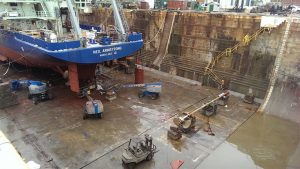 Despite Neil Armstrong‘s young age, the current yard period also includes a few maintenance tasks. The American Bureau of Shipping, which sets safety standards that apply to all UNOLS ships, requires that propeller shafts be pulled and inspected every five years. Rather than doing both at once in the next yard period, the WHOI team decided to remove the starboard shaft now so that they will be on alternate schedules in the future.

While it would be a stretch to say the Neil Armstrong will come out of the yard in fighting trim, given the added ballast, it will come out ready for the next phase of its life, beginning with a packed schedule through the rest of 2017.