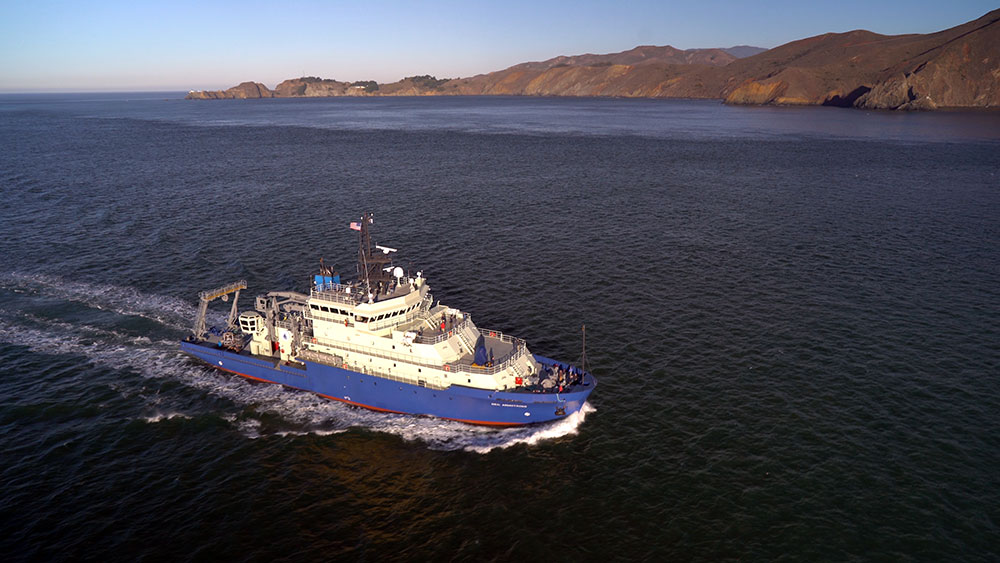 With Neil Armstrong scheduled to arrive in Woods Hole at 10:00 a.m. Wednesday, we thought it would be a good time to quickly catch up on news from the ship.

After transiting the Panama Canal, it arrived in Charleston, S.C., in December, where it began the process of having its science mission equipment installed. From the top of the pilothouse to the bottom of the hull, Neil Armstrong took on an alphabet soup of new gear. The full list is long, but suffice it to say that the ship is now one of the most technically advanced research vessels afloat. We’ll detail individual items in future posts about some of the science verification cruises. 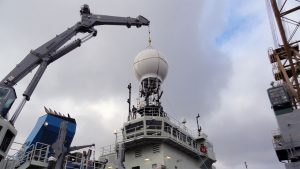 Armstrong receives its main satellite antenna during a shipyard period in Charleston earlier this year.

In February, Neil Armstrong made a trip to the U.S. Navy’s Atlantic Undersea Test and Evaluation Center (AUTEC) in the Bahamas. There, acoustic experts recorded and evaluated the frequency and amplitude of sound the ship radiates into the water while underway. This is important to know on a vessel that relies on sound to survey almost anything from surface to seafloor. A full report is still in the works, but initial assessments indicate that the ship is even quieter than called for in its design specifications. This may help increase the sensitivity of its already highly anticipated suite of acoustic sensors.

Neil Armstrong is smaller than Knorr, so the one question on the minds of many has been “Will it be big enough?” In particular, will it be big enough to handle the loads that John Kemp from WHOI’s Mooring Operations, Engineering and Field Support Group routinely piles on any ship onto which he sets foot. Honestly, they guy’s like a force of nature—the one that abhors empty deck space. 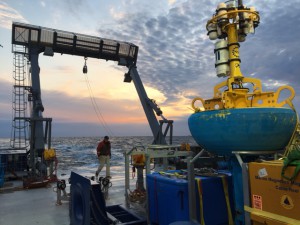 John Kemp surveys his domain after recovering a surface mooring from the Pioneer Array. (Photo by Dick Pittenger, WHOI)

Well, Kemp was on Science Verification Cruise (SVC) 1, where he recovered a single mooring and, while it wasn’t big enough to take up the entire deck, he set minds at ease after seeing how much space he has to work with and, just as important, how nimble the ship’s main crane is at moving equipment around. “You look at schematics for two years and wonder how it will do,” he said. “But when you finally see it, you can tell it’s going to be great. I think people are going to be pleased.”

Lest you think Kemp is a strict utilitarian when it comes to ships, he also noticed something that few others have taken the time to remark on. “It’s a beautiful ship,” he said.

Neil Armstrong is currently out at the Pioneer Array picking up some surface moorings that need routine maintenance. On Wednesday morning, it will work its way up Vineyard Sound, turn left, and head into Woods Hole for the first time to the cheers of a crowd on the dock. If you can’t make it, you can watch the arrival celebration live, including comments by Neil’s wife, Carol, and NASA astronaut Suni Williams.

We’ll also cover upcoming science verification cruises here over the next several months, including a trip with remotely operated and autonomous underwater vehicles and cruises to test the ship’s geophysical and biological survey capabilities. In June there will be an open house to give the general public a chance to meet and tour the ship before it heads off to the North Atlantic on cruises to support the Overturning in the Subpolar North Atlantic Program (OSNAP) and the Ocean Observatories Initiative (OOI) Global Irminger Sea Array.

But all of that remains weeks and months away. For now, we look to April 6 and the grand entrance of Neil Armstrong to its new home.