[NOTE: This post was written Friday and posted Saturday] 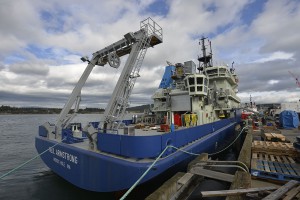 Armstrong at Curtis Wharf in Anacortes with one day until sailing. (Photo by Ken Kostel, Woods Hole Oceanographic Institution)

One day until we sail and there is still a lot to do, from the technical to the mundane. Technicians with the Shipboard Scientific Services Group are still running cable and setting up the science work areas. The docking collar on the crane that handles the CTD rosette has to be attached. The ship needs to be ballasted. And the trash has to be taken out.

It’s a long list, but not insurmountable and, one way or another, we’re leaving. Barring any major problems, at 3:30 p.m. Pacific Saturday, we will cast off and Armstrong will begin its trip home to Woods Hole. This will undoubtedly be a late night and an early morning, but this crew, which came almost entirely from R/V Knorr, has a reputation for getting things done. They take pride in that fact and those of us who do not have official duties take solace in it. 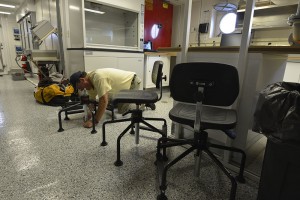 Assembling chairs, because someone has to. (Photo by Ken Kostel, Woods Hole Oceanographic Institution)

There is no science planned between here and the first shipyard period where Armstrong will receive the bulk of its scientific gear, so most of the urgency is at least partly driven by a sailor’s desire to see things are put right before setting sail. For that reason, one of the most important things to happen before we leave will be to make sure that anything moveable is tied down. That task becomes even more critical whenever we look at the printout of the marine forecast that’s posted on the wall outside the ship’s library. It’s not looking good. No one is worried, but no one has ridden Armstrong out of the channel yet, so we don’t know how it will ride.

And there’s only one way to find out.