Time to Get Going 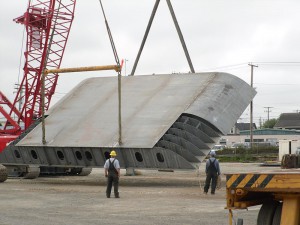 In just a few days, R/V Neil Armstrong will begin the first of four legs in its trip to the East Coast. On October 31, it will leave Anacortes, Wash., and head south to San Francisco. From there it will continue down the coast to the Panama Canal, transit the canal, and then turn north to an as-yet unnamed shipyard, where it will complete its fitting-out and to conduct a series of science verification cruises to test its ability to support ocean-going research. A fifth leg in the spring of 2016 will take it from the shipyard to its eventual home in Woods Hole.

Time is a funny thing, as anyone who once held a newborn, only to turn around and find themselves driving away from a college campus with an empty car. Back in 2010, when WHOI was selected to operate what was then known as AGOR (Auxiliary General Purpose Oceanographic Research Vessel) 27, and even as recently as September, when signatures were still drying on the paperwork transferring Armstrong to WHOI, the date of departure seemed impossibly far away. Now time is moving like a juggernaut, and the crew is busy completing a long list of final tasks before departure. 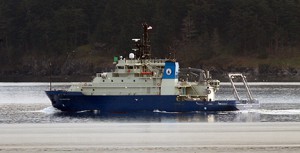 Last week, the ship passed its Coast Guard safety audit, a key milestone in certifying its readiness for sea. But in reality, there have been many milestones over the past four years it spent taking shape in the friendly confines and waters of Anacortes and when these final tasks are complete, it will be time to leave and time to begin looking forward to its future carrying scientists and engineers from around the world in their quest to understand more about the ocean. Like its namesake, R/V Neil Armstrong will make many small steps and hopefully just as many giant leaps over what is likely to be a 40-year career of exploration and discovery.

On the way to San Francisco, the ship will stop so the crew can test the oceanographic winches—a task that requires deep water, something that’s easy to find in the canyons and trenches off the West Coast of North America. We will try to post along the way (satellite connectivity willing) to give you an look at Armstrong‘s voyage home and an inside view of the nation’s newest tool to understand our global ocean and the many ways it sustains life here on Earth.