Of Winches, Cranes, and Wires 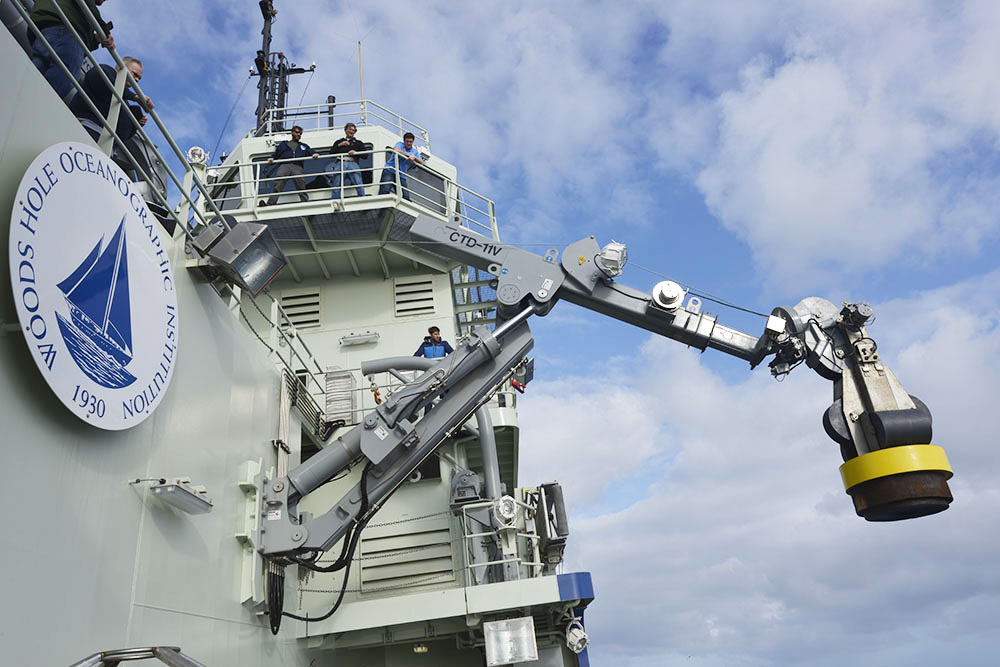 The first test of the CTD knuckleboom with an iron weight drew a crowd to the catwalks. (Photo by Ken Kostel, Woods Hole Oceanographic Institution) 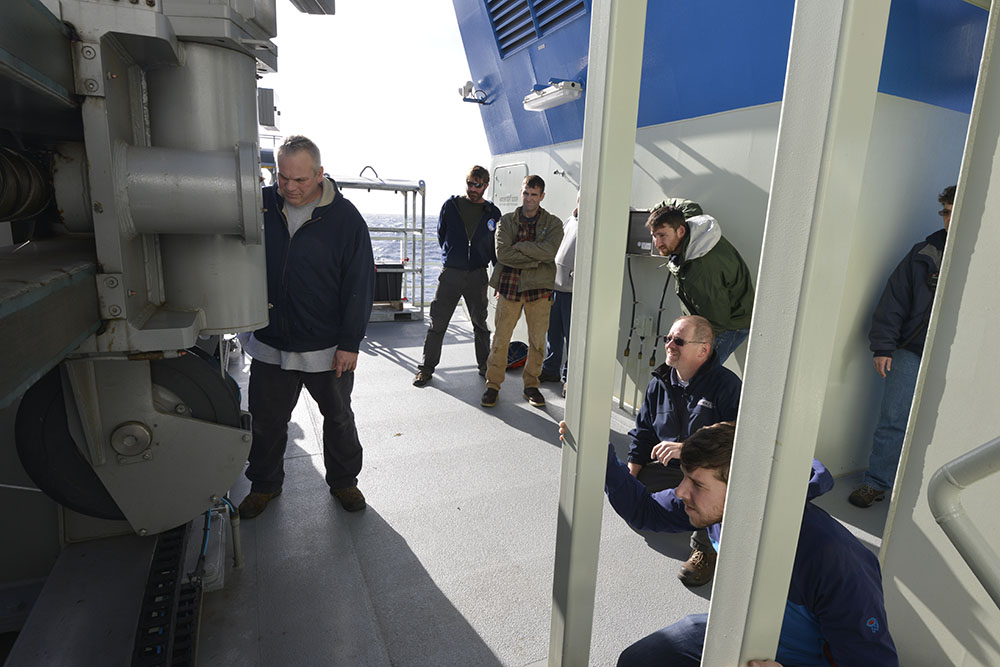 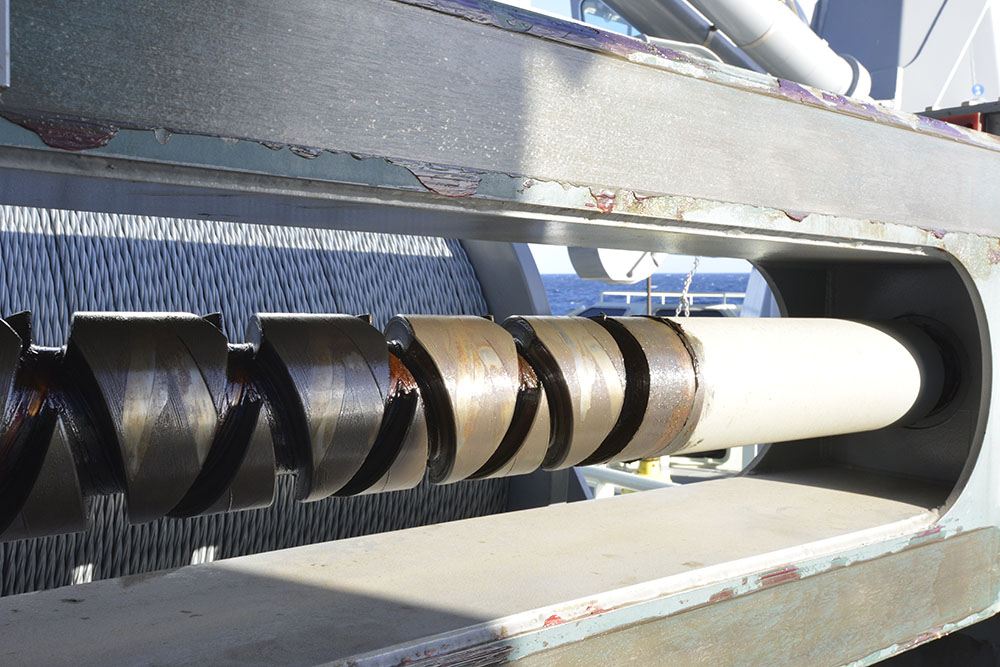 The diamond screw on the level wind of the winch holding 10 kilometers (6 miles) of 3/8" wire. (Photo by Ken Kostel, Woods Hole Oceanographic Institution) 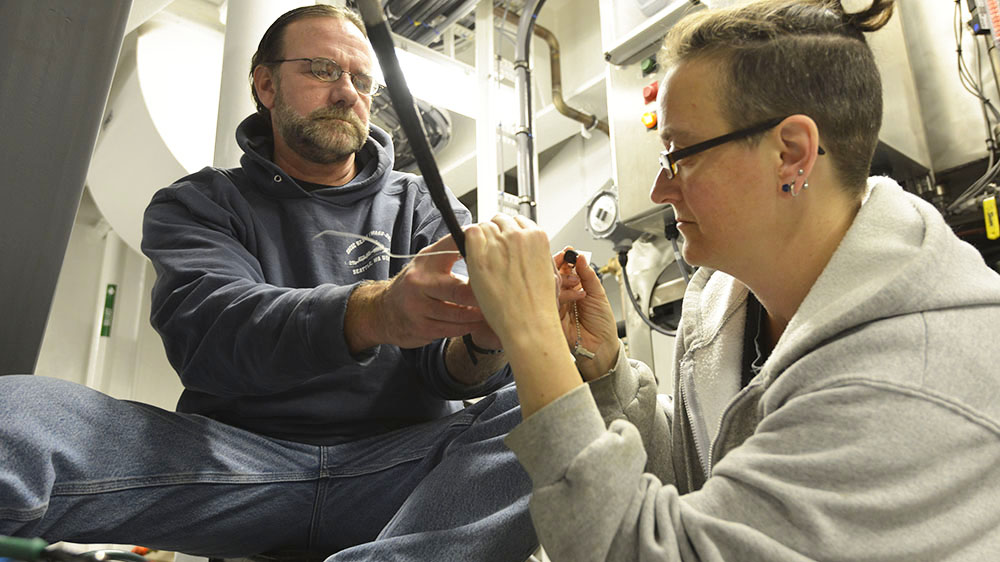 Chris Griner and Amy Simoneau test one of the three optical fibers at the center of the .681 cable. (Photo by Ken Kostel, Woods Hole Oceanographic Institution) 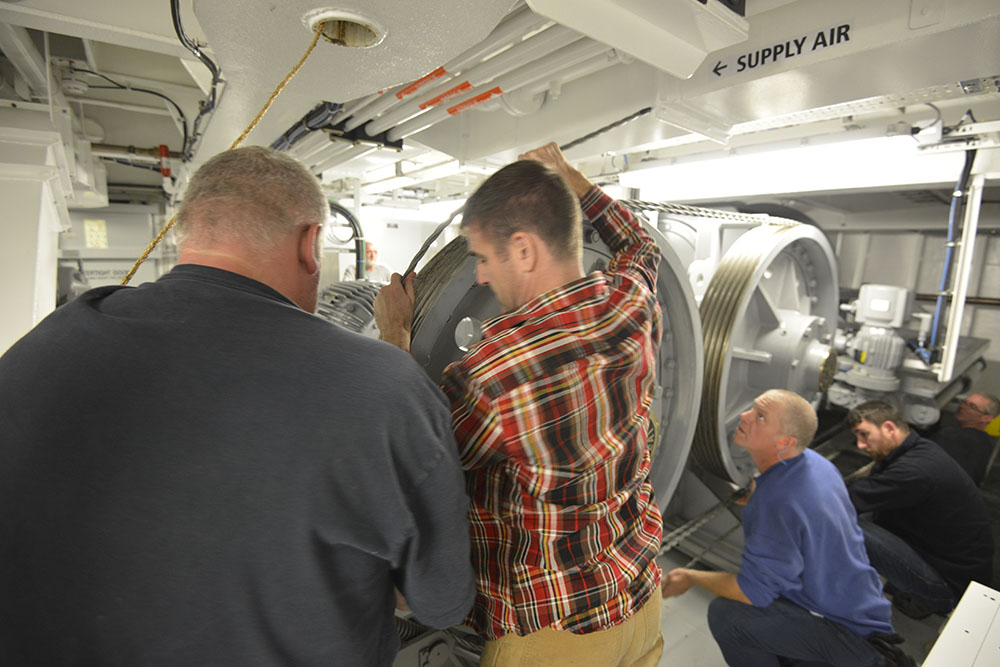 It took a team to thread the 9/16" trawl wire onto the traction drive in the winch room belowdecks. (Photo by Ken Kostel, Woods Hole Oceanographic Institution) 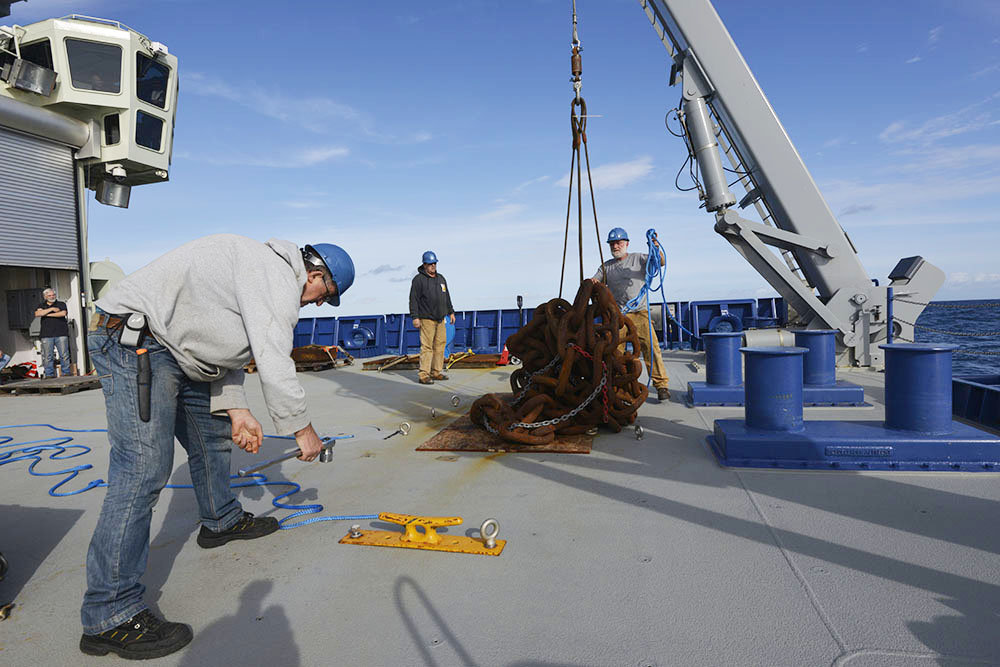 Crew of Neil Armstrong test the 9/16" trawl wire on the A-frame with 4,700 pounds of chain. (Photo by Ken Kostel, Woods Hole Oceanographic Institution) 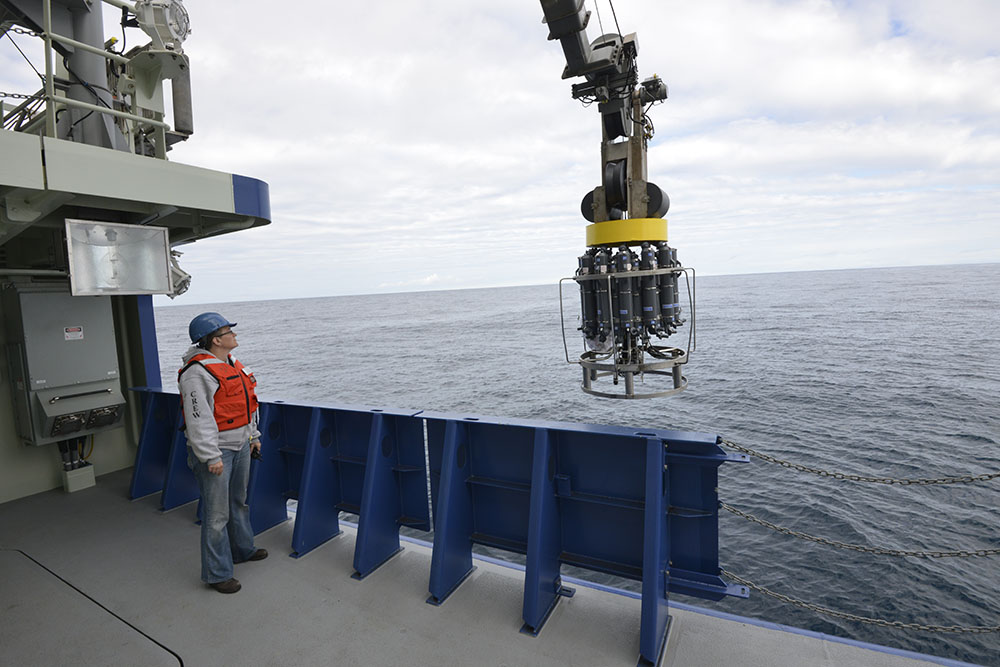 There are two things to know about winches, cranes, and wires: they are very complex and they are crucial to this ship (and to any oceanographic research vessel) accomplishing its mission. Day 3 of the transit to San Francisco began a series of tests that, if all goes well, should finish today and that constitute the main objective for this part of our trip.

First, a bit of nomenclature. Any of the wires that have copper or optical fibers at their core, giving them the capability to transmit data and power are called cables; any of the wires that are merely braided strands of metal are called wires. For simplicity, I’ll use the word wire to mean either type. There are 10 kilometers (6 miles) of on each winch drum the Neil Armstrong.

This is the first time the wires on each of the four winch drums has been run out, making it a crucial time in assessing the ship’s ability to support science. Two of the wires (one 3/8″ wire and one .322 cable) can be threaded onto each of two cranes on the starboard side. These are actually not cranes, but “knucklebooms” that unfold from the side of the ship like gray praying mantis arms to lower instruments into the water, ideally with minimal tending by deck crew. Just to add to the complexity of the operation, one of the winches is also able to compensate for the motion of the ship, so that anything hanging from it will remain relatively stationary in the water or can be brought up at a constant speed.

Under the rear deck of the ship, there is a large traction winch with two drums of wire (one 9/16″ wire, one .681 cable) that can be threaded up to the large A-frame on the stern. These are used for towing and lifting heavy loads, in the case of the 9/16″, or, with the .681 cable, to operate ROVs like Jason, by transmitting power, control signals, and even high-definition video along the length of the cable.

The complexity comes in winding and unwinding these drums in a controlled manner and under heavy loads. There is a severe sort of beauty to the precision with which the winches were designed and built—in particular with which something called the level wind was built. As the winch drum turns, the level wind places each strand of wire beside the one that came the turn before it and in between the two turns directly beneath it. Without the level wind, that ordered simplicity would be replaced by an over-wrap, or worse, a horrifying tangled mess called a wuzzle—something that can damage the wire by crimping or crushing it and that has been known to end a cruise prematurely.

To do its job, the level wind has to account for the diameter and type of wire, the number of layers already on the drum and the number of turns on the current layer. These winches have a level wind that is both electronically and mechanically controlled. The software controlling the level wind is hidden from sight, but the mechanical part of the level wind, something called a diamond screw, is laid bare. It is a massive, precision-machined shaft that turns slowly with the drum to keep the winding head (and wire) in just the right position at all times. One tiny deviation forms the nucleus of a wuzzle.

That’s the complex part. Now for the importance of these machines. Quite simply, we could not do ocean science without them. Any research ship can only move over the surface; we need other instruments to help us look into the depths. Some of those are (or soon will be) mounted to the bottom of the hull: sonars and current profilers and the like. But many scientists come on board eager to put things in the water that take samples, gather data, or explore features like hydrothermal vents. For that, we need winches, cranes and wires (or cables). And we need them to be reliable, well maintained, and ready to work turn after turn and time after time. Hence the care with which these are being tested, observed, and assessed.

One of the most common instruments that will be going over the starboard side is the CTD (conductivity, temperature, depth) rosette, which measures those basic properties of the water and is equipped with two dozen 10-liter bottles that a technician can close from the surface to capture water sample at specific depths. This is considered the bread-and-butter of ocean science. Today, in our last test, we lowered the CTD almost to the bottom, a little over 4000 meters (2.5 miles).

It’s later now and the CTD is on deck. When it came to the surface, it attracted the attention of some passing dolphins. The technicians still have to look at the data and assess how well the winches operated and the crew has to discuss how to fine-tune their choreography on deck with the new cranes, but overall things went well. The cranes might be fancier and the wires and winches shiny and new, but this crew has worked with heavy machinery like this for years.

Every cast brought a little more light to the question of how well the Neil Armstrong would be able to that most basic task of putting something over the side and bringing it back again. (The answer: It will do just fine.) There are some changes that will need to be made in the upcoming yard period to accommodate different instrument packages, but with that final deployment today, carrying a CTD within a few dozen feet of the seafloor and back, Neil Armstrong made one thing clear. This is a research vessel and it is equipped to bring knowledge to the surface.