Things get busy anytime Neil Armstrong returns to port, but when there’s just a little over 24 hours to completely unload and reload a packed ship, well, things get downright hectic. Fortunately, there’s a method to the madness.

When the ship came back from leg 2 of the Fall 2017 Pioneer Cruise, it was carrying two large Coastal Surface Moorings and all the associated instruments, vehicles, and equipment—and then the crew had to load roughly an equal amount of gear associated with six Coastal Profiler Moorings. The mooring technicians, dock crew, and ship’s crew all worked from a master plan formed from years of experience, and made it all look easy.

My Panama Canal Odyssey: With WHOI from Ocean to Ocean 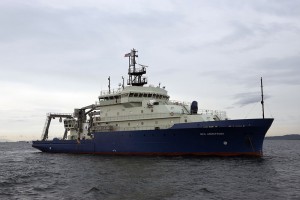 R/V Neil Armstrong at anchor waiting for its turn to enter the Panama Canal from the Pacific Ocean side. (Photo by Chris Linder, WHOI)

The Panama Canal is described as one of the engineering wonders of the world. Never having seen it, I jumped at the chance to sail its length aboard the newly built research vessel Neil Armstrong during the ship’s inaugural voyage from the West Coast to Charleston, N.C., and eventually to its home port on Cape Cod at the Woods Hole Oceanographic Institution (WHOI), where I am a member of the Corporation.

We few like-minded zealots for the spectacle of a new ship with an iconic name transiting between oceans flew to a waterfront hotel on the Pacific side of the Canal two days before the ship arrived. Five of us had sailed together a few years earlier on a trip to hike the penguin and seal colony shores of South Georgia Island for a week, so it was also a bit of a reunion.

On the morning of the lay day we toured a Smithsonian biological research station on a small island connected to the city by a hundred year-old causeway made of tailings from canal dredging. This and several nearby islands were armed with heavy artillery during the two world wars to defend against naval attacks on the Canal that never materialized. 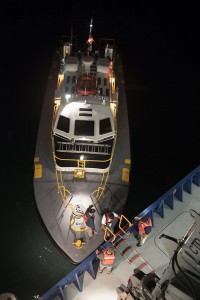 Our pilot for the Canal transit comes on board. (Photo by Chris Linder, WHOI)

In the afternoon, we visited the observation platform and museum at the Miraflores Locks—the “uphill” locks on the Pacific side that raise ships to nearly the level of the manmade Lake Gatun that constitutes the major passageway across the 45-mile-wide isthmus.

The next day, the ship’s agent provided a van that took us to a dock from which a launch ferried us to the ship anchored among several dozen other, mostly larger ships also awaiting their pilots and assigned transit times.

The rain held off on the Pacific side, but our schedule slipped until we ended up making the transit at night. Fortunately, the lighting at the locks was enough to provide great views and the allowed WHOI photographer Chris Linder to capture our progress through the first two locks.

It amazed me to see these big locks, built by the US Army Corps of Engineers 100 years ago, in such fine shape. They were and still are powered mostly by electricity, but if you look closely at the time lapse sequence, you can see one thing that has not changed—two men in a rowboat is still best way to get a line from the ship to the electric tugs (originally built by GE) that pulled us through. 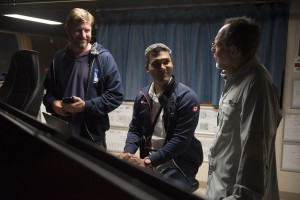 Today, the existing locks are too small for the growing number of huge container ships that haul cargo between markets in Asia, North America, and Europe, so Panama is building a third set of locks nearby that will be 50 percent larger than the existing 110-by-1050-foot locks. These are scheduled to open in 2016. Some, however, question the economics of this major new investment—and there is a persistent but diminishing threat of a Chinese-funded canal across Nicaragua.

It was a great trip that was enormously enriched by my contemporaneous reading of David McCullough’s Path Between the Seas, which documents in vivid detail the trials and failures of post-Suez efforts by the French in the late 1800s, as well as the agonizing political difficulties that occurred in Washington before Teddy Roosevelt finally settled on the Panama location for a canal between the oceans against the wishes of interests who favored Nicaragua. While the engineering were, indeed, herculean, it was the conquest of yellow fever and malaria that actually allowed the Canal to be completed—mostly using labor from the West Indies, not Panama. The public health achievements were and are largely unsung, but were every bit as dramatic as the blasting, digging and dredging that gave the Canal its final form. 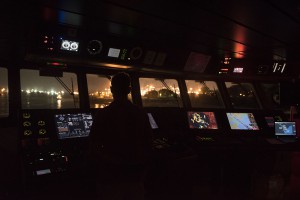 View of the Canal from the bridge. (Photo by Chris Linder, WHOI)

In one of the oddest quirks of geography, we actually had to travel west through the Panama Canal to get from the Pacific to the Atlantic, and at daylight we exited the Canal through the Gatun Locks into Limon Bay on the Atlantic side. A group of us disembarked in the rain and traveled by launch and van back to the airport through morning rush hour in downtown Panama City. From there, most of us flew back to our respective homes on Thanksgiving Eve.

In all, Neil Armstrong is a fine ship with an amazingly capable and dedicated crew. I am confident that under WHOI’s experienced stewardship, it will serve the ocean research community—and the nation—well for many decades.